While I didn’t take part in the Old Computer Challenge I wrote about last week, I did play around with the laptop a bit since then.

First of all, here’s a screenshot: 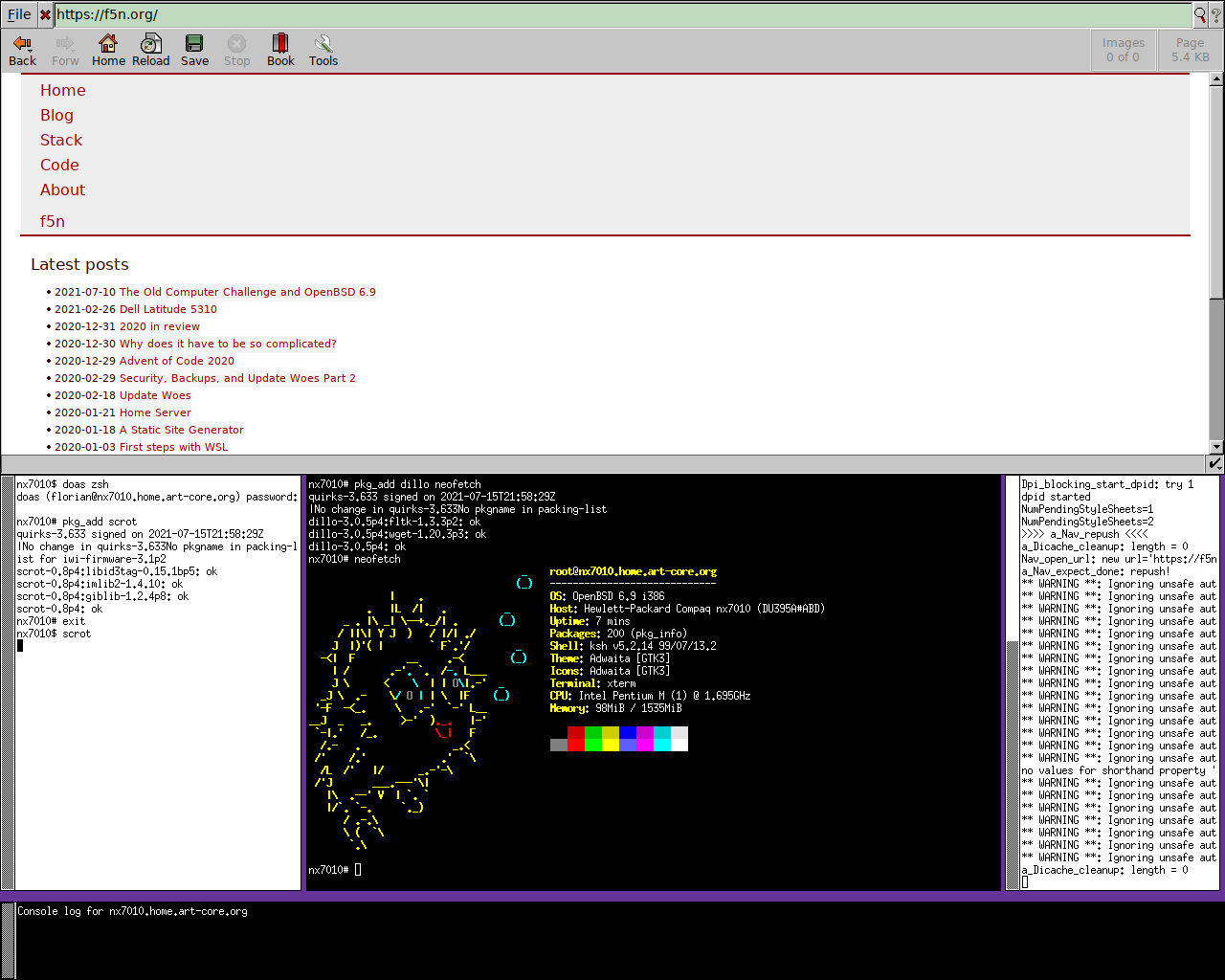 I didn’t take the time to properly configure my terminals to start with a black background at the start, but later I did.

Only after this screenshot I noticed that something seems off and xrandr told me that I’m running with 1280x1024, and not the display’s native 1680x1050 resolution, which you don’t really notice if you only have shells open. Not sure I can fix that with the graphics driver issues…

Also for some this reason wifi via the iwi driver didn’t seem to work at first, networking via cable was instantly fine, as expected. But of course I have a cat5 cable near my sofa in the office…

On a second try it did actually work with my mobile phone’s hotspot and then also with my normal AP, but seemingly not via /etc/hostname.iwi0 and sh /etc/netstart, but only when doing:

In the end I’m back to cable because something was still slighly wrong, even though I got route show to look more correct, but I wasn’t in the mood to fix this now. I think wifi can be filed under: it works.

Not sure I was ever going to be happy with the ratpoison keybindings. But Ctrl-t on this keyboard could get painful after a while (pinky + index), whereas my usual win-1 to win-0(thumb + ring/middle/index) feels a lot better. Also the spacebar on this laptop isn’t great, I keep on missing spaces when I type.

Also no idea why I had thought that i3 was using a lot more RAM, maybe that was my weird bug on Ubuntu last year, when I switched it was under 5MB used.

So here’s a new screenshot: 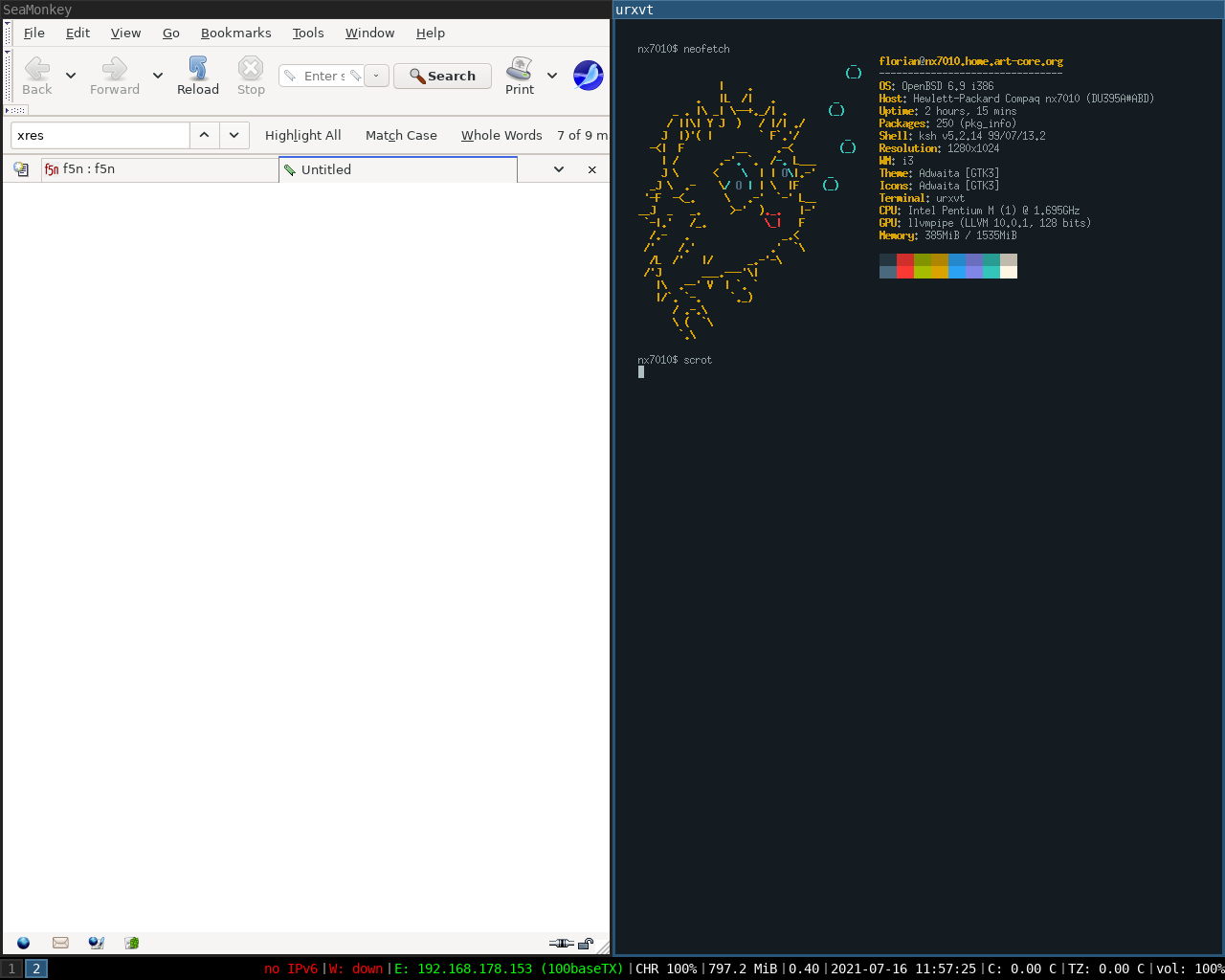 The browser situation is still a little unclear, I tried netsurf and dillo, but I am not happy. Guess I need to install firefox after all and see how it goes. [time passes] The results are in and they are not great. Loaded up a YouTube video and got 2 ads, had some stutter, then during the 2nd ad the tab crashed. Reloaded, music played fine then. CPU was working and Firefox with one tab open already drew a lot of RAM. Closing the tab and opening my website did not improve RAM usage in a meaningful way. Then I tried seamonkey, this seemed to be a little better.

I tried youtube-dl and mpv and that used less CPU, so I think that’s a workable solution, at least for certain things. The official youtube-dl didn’t work out of the box (even after installing python3), but the one from the ports did. Again, thank you, OpenBSD.

Every page I visited in Seamonkey seemed fine, only Element (the Matrix web client) wouldn’t accept this browser.

Didn’t try to read mail, but I’ve used mutt in the past, so I would probably try that (for a week). [time passes] Ok, I tried it. IMAP works fine, but this version of mutt seems to be compiled without SASL, so I can’t send mail via this mail server I tried. also it’s not compiled with DEBUG so I gave up troubleshooting very quickly.

irssi works fine, weechat would be fine, although I prefer Quassel.

I think one of the main problems is actually trying to use OpenBSD (where not all software I use is available), at the same time trying a different window manager, and then the slow hardware - but I think the latter is the least of my problems, if I can keep my 1.5GB of RAM, that is.

Using a Linux distro I know very well (Debian for example) would’ve made some things a little easier, I guess. But that doesn’t mean I had any major difficulty with OpenBSD, despite only ever using it on servers or on this old notebook, and I didn’t use it enough to run into any real road blocks in daily usage.

But during the week I took some notes of stuff I was using to at least guess how this would work out:

So yes, it mostly boils down to the fact that a major World of Warcraft patch went live a while ago and that I am spending a good chunk of my spare time with that at the moment. So I need a computer to run WoW and Discord on. And some additional resources in the form of (modern) websites and YouTube videos, but the latter two could be solved.

The only coding I did outside work this week was in rust, and the files sat on my linux server, where I also compiled them. I used Visual Studio Code with the excellent remote support to work from Windows via ssh, but I could’ve done it with vim, as I did in the past.

Many of the typical use cases that other people mentioned are completely foreign to me.

Despite writing lists about windows software in the past, there’s nothing really innate to working on Windows, actually a lot of the stuff is trivial on Linux or BSD and only needs a special Windows solution.

I do have a couple of spreadsheets in Google Docs, usually when there are too many columns to use tabs in a text file (I use a lot of text file), but I hardly ever fire up LibreOffice on my personal machines, maybe a few times per year, and that has never been different.

OK, that’s enough of a wall of text. It was a fun experiment, but I’m not sure I would’ve wanted to do this for a full week. Most things except the modern web seemed to work just fine. I would have needed to use webmail or compile my own version of mutt. I would have had to use irssi over Quassel, and a few other small things, but overall it’s probably doable (with enough RAM) and probably even easier with Linux.

But this challenge has shown me that you should be able to live with something like a dual-core 2GHz CPU with 2 or 4 GB RAM, which probably means a CPU from around 2009, think Allendale or Wolfdale, that’s still 12 years old.

But my 1.7 GHz Pentium M (I think it’s a Dothan) is a bit slow for YouTube and modern web apps.